How to interview at consulting companies 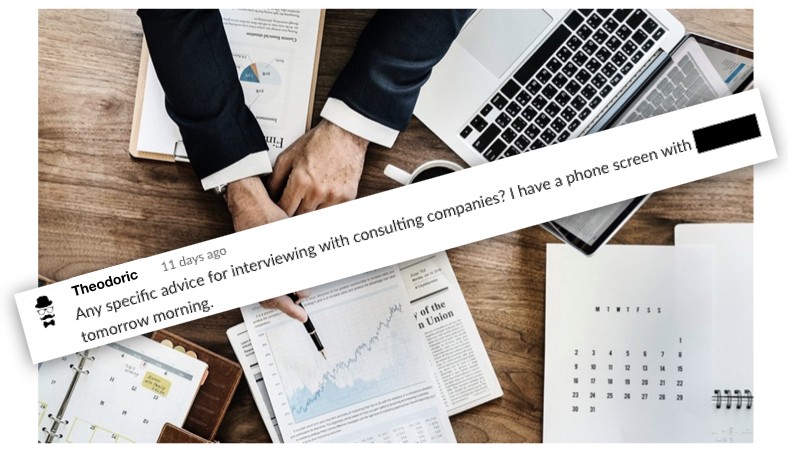 The problems that a company needs to solve determine the interview questions they ask their candidates. So, if you’re preparing to interview at a company, you’ll want to ensure that you set some time aside to do research into them, so that you can come up with educated guesses about what those problems might be.

Fortunately, there are broad categories of companies that encounter generally similar problems, and being able to recognize these companies can significantly improve the chances that you’ll be well-prepared for your interview. One of those categories is consulting firms, and that’s the topic that came up on SharpestMinds’ Slack last month via an anonymous mentee who we’ll call Theodoric:

The first answer was a great high-level summary of what to expect:

Another important thing to keep in mind: the importance of applied research, and projects, as SharpestMinds alum (and now data scientist at IQVIA 🚀) Karthik Viswanathan points out:

Theodoric adds a bit more context (notice that he picked up that information by asking the company that was interviewing him — this is always a good move!):

SharpestMinds mentor Ryan Kingery also stopped by with a word of warning about consulting companies. Although I don’t personally feel quite as strongly as he does, I’ve definitely heard this sentiment from a lot of other people, so it’s something worth considering if you’re looking at consulting roles:

…and some great tips on how to speak the interviewers’ language:

And that’s a wrap!