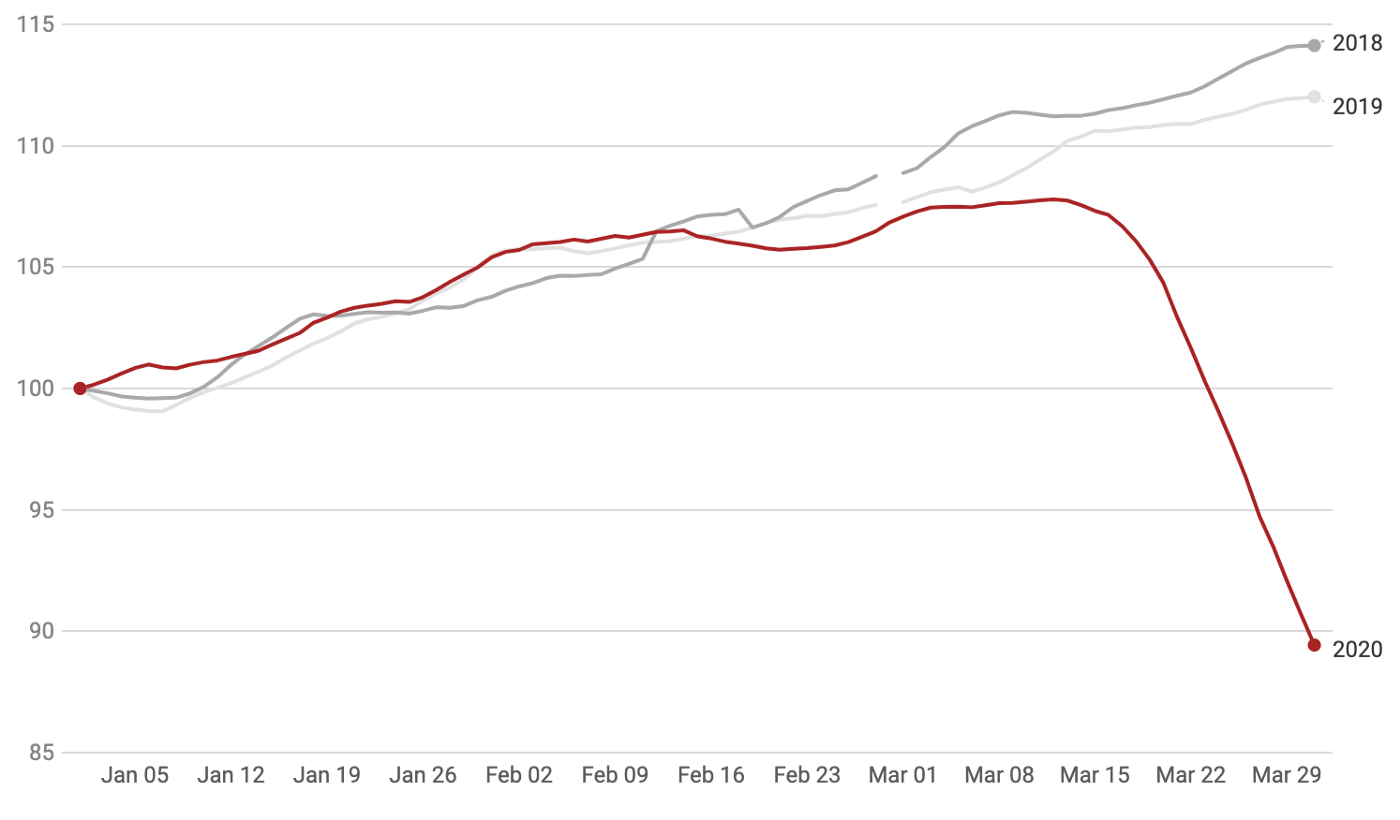 I work at a company that mentors data scientists for free until they’re hired. Because we only make money when our data scientists get hired, we get a very detailed view of the North American data science job market and how it’s evolving in real time. We know who is getting hired where, how much they’re being offered, the details of the offer negotiation process, and lots of other data.

In this post I’ll break down what we’ve been seeing in the data science job market over the past month. I originally released some of this information in a tweetstorm last week, but I’ll be going into greater detail in this post.

All the statistics below are based on the internal data from our mentorship program. We closely track which of our mentees are getting hired where, when, and by whom. The extrapolation to the broader data science job market won’t be perfect, but it should be quite close based on our scale and geographic reach.

There’s been a general hiring slowdown during March, by a factor of about 60–70% for data scientists. We actually expected hiring would go to zero temporarily, but it hasn’t — at least not yet.

The impact of this slowdown is very uneven. Companies that rely on foot traffic (e.g., fashion retailers) have been hit hard, are freezing hiring, and are doing layoffs or furloughs. Business-to-business software companies like Twilio and Airtable are largely hiring normally. Remote work enablers like Slack and Zoom are accelerating recruitment.

So far, we’ve seen more mentees get hired in April compared to the same period in March. But it’s still early in the month, and things are changing fast.

In March, we saw several finalized job offers get withdrawn without notice. That means actual, signed agreements — with commitments from companies like “Your pay is $X0,000 and you start Monday. Welcome aboard!” — were pulled back. This is unprecedented: In the 18 months before March, it happened zero times.

Some of the companies that withdrew offers were startups; others were big companies you’ve definitely heard of. It wasn’t possible for us to predict who would withdraw their offers and who wouldn’t. Watch out for this.

In April, we haven’t seen any more of these offer withdrawals so far. We suspect most companies have now adjusted their hiring plans, so this sort of thing will be happening less.

Layoffs haven’t hit too many data scientists just yet. So far only 3% of our alumni have been affected. That includes both temporary furloughs and salary reductions that fall short of layoffs.

When doing layoffs, most companies cut early, cut once, and cut deep. This tends to reduce uncertainty and risk for the employees that remain. If your company is using this strategy, and you survive the first round of layoffs, your job is more likely to be secure in the medium term.

If you’re worried about getting laid off, your first line of defense is to become indispensable. Find ways to save your company money and to add value, even if that’s beyond the scope of your job description — and do it without being asked. Most companies don’t want to do layoffs. The more value you bring, the more likely you’ll stick around.

(Companies: If you need to cut payroll, please consider temporary furloughs instead of firing folks outright. That will give your employees the optics of still having a job, plus the flexibility of being able to look for a new one. It’s the right thing to do.)

Several job posts you’ll see right now are duds. A lot of companies have cancelled positions internally because of COVID, but haven’t yet deleted their job posts. Applying through job boards was never a great strategy, but it’s even harder now because of these dud job posts.

In-person networking is also off the table for obvious reasons.

What works better is cold emailing and LinkedIn outreach. There’s a lot of detail involved in doing these really well — but the quick version is: 1) Do your research on the company; 2) Send a thoughtful, well-crafted message; and 3) Talk about concrete things you’ve built or accomplished.

Interestingly, a big factor in whether a person will answer your cold email or LinkedIn message is whether or not that person has kids. People without kids are often bored at home, and more likely to answer; people with kids are busy taking care of them, because daycare is off the table these days too.

Online meetups might also be a good channel for networking. We aren’t sure about this yet — it’s too early to say. But some of our mentees are actively experimenting with it.

If you get an interview, you’ll probably be interviewed over Zoom. Zoom is a very stable video platform, but still try to make sure your Internet connection is solid. If you don’t have a great connection, it’s okay to mention that at the start of the interview. Most interviewers will understand and cut you some slack.

(Zoom used to have a setting that told the meeting organizer what you were looking at on your screen, and this was briefly a factor during job interviews. Fortunately, they recently removed it.)

Here’s the good news: Pretty much every job is suddenly remote. Geographic barriers have disappeared overnight. You can now apply to a much wider range of companies than before. This is especially great for folks in rural areas, and it levels the playing field in a lot of ways.

That’s what we’ve been seeing so far, but we’re still in the early days of this pandemic. It’s hard to predict what the next few months will bring, but at the moment, getting a data science job is hard but not impossible. The trick is to find the companies that haven’t been hit too hard by lockdowns.

If you want advice on how to navigate the DS job market — particularly in North America — feel free to follow me on Twitter and I’ll try to help you.

Good luck out there everyone. ❤️